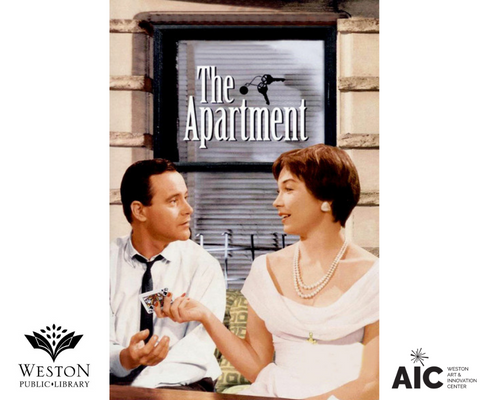 Vienna-born director Billy Wilder (Sunset Boulevard, Double Indemnity, Stalag 17, Some Like It Hot), was known for nothing if not his sardonic style and this film is considered one of his sharpest. Set in a mammoth insurance company, Jack Lemmon plays a humble office schlub who pines for Shirley MacLaine’s elevator operator, but he is at the mercy of his bosses, who sing his praises so long as they can use his Manhattan apartment for their affairs. Enter head boss Fred MacMurray, who finds out about the arrangement––only to use it for his own affair with MacLaine.

The Apartment is a ribald comedy with some hard scenes, and it should be noted that Fred MacMurray was so convincing as a heel that he was repeatedly accosted by angry fans after the film was released—prompting him to play the lovable father in My Three Sons.

BE ADVISED–– This film is rated TV-PG, and contains smoking, drinking, period sexual references, a punch in the nose, an attempt at self-harm and Eisenhower-era office dynamics.