WPL Film Club @ the AIC: The Wings of The Dove 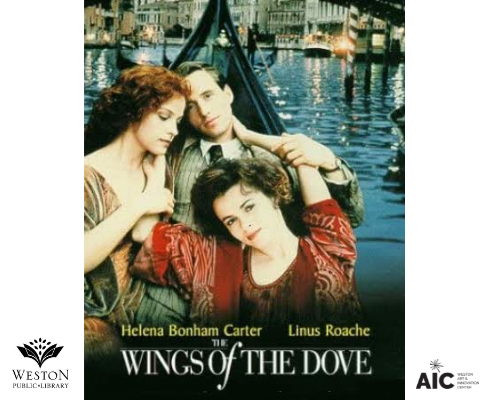 This film could be described as one of the best “Merchant & Ivory” films––even if neither of them had anything to do with it. Based on the Henry James novel and with cinematography that could have been by John Singer Sargent, this film catches both the élan and squalor of the Edwardian era––when falling from society often meant utter destitution. Helena Bonham Carter is at her incandescent best as Kate, a debutante facing a precarious choice: she can marry the poor journalist she loves (Linus Roache), or stay in the good graces of her benevolent but dominating aunt (played by an icy Charlotte Rampling). Instead Kate contrives a third path when she befriends a dying American heiress who is kind, generous, and smitten with Kate’s lover. A devil’s bargain is struck when they travel to Venice and Kate steers the man she loves into a relationship with the heiress, and her pragmatic instincts soon collide with loyalties and desires.

This is a radiant film­­––as glorious as it is bittersweet––with the Italian locations never more sublime.

BE ADVISED, this film is rated R, with smoking, drinking, drug use, and brief nudity.